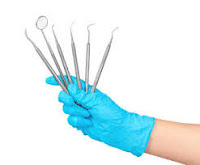 Yesterday was a date with the dental hygienist, although I would have preferred, say, waterboarding or perhaps major surgery.

I’ve grown to despise having my teeth cleaned, mostly due to the dreaded water pick that would rocket subarctic water at my receding gum line, sending me straight to the ceiling. Now, (thank you, Covid!) they’ve had to travel back down the dental evolutionary scale and revert to scrapers and pointy sharp things.

There was a new face behind the mask today, my beloved hygienist having left the practice. Although really I only had body type to go by,( the previous person being round and this one decidedly angular) swaddled as she was with head wrap, face shield and mask.

It felt downright risqué to take my mask off indoors. I sat, was bibbed, and she settled in on her wheely chair. As she reached for the first instrument, I informed her that in the past I’ve always had a topical numbing agent applied. (Had she even read my chart??) She said, of course!, and jumped up to gather it from the cabinet. On the way back she tripped over her chair, sending it careening against the wall, but she managed to stay upright. We settled in again. The light was blasting into my face while the sunglasses that are usually handed out still sat on the counter. I asked for those – oh, of course! -  and up she popped.

I was beginning to wonder if I was her first patient out of dental hygienist school, but the rest of the appointment went fairly smoothly. Sure, she was a little OCD, going back to spots, flossing, scraping again, flossing some more, but it was mostly painless (my only goal) and she was certainly thorough. We did hit a rough patch when the water-sucker-outer thingy fell out of my mouth onto the floor, but it was cleaned up (hopefully – who knows what they’re doing there in back of you?) and popped back in.

She only tripped a couple more times, was blessedly without any conversation, and sent me on my way with three (!) sample toothpastes. I’m scheduled to see her again in June.