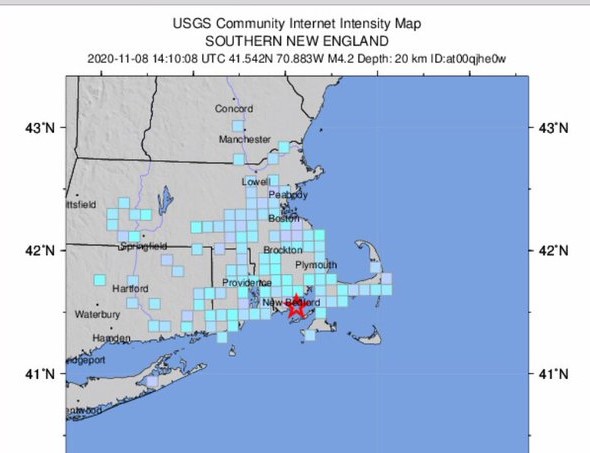 9:00 a.m. Sunday morning I was sitting at my computer, meandering through my tea and thinking I should really get up. Change the bed, take a shower, get dressed, do something.

And then the house shook. No noise, just an odd shudder. Turns out it was an earthquake in New Bedford, about 116 miles by car, or 91 miles as the quake travels.

I lived in Oklahoma – what I’ve always thought of as tornado country – for 3 years and never once saw a funnel.  Yet this summer we marked the 9th anniversary of the EF-3 tornado that ripped through 39 miles of our corner of Western Massachusetts in 2011.

In 1971, just before My Guy was sent to Fort Ord in Monterey, California, four earthquakes of magnitude 4.0 and higher were recorded in the Monterey Bay area. Fortunately, at no time in following years that he was stationed there did we experience a trembler.

Earthquakes here in the Bay State are pretty uncommon. The epicenter of the Mass quake was in Buzzards Bay, and the Geological Survey received over 19,000 “did you feel it?” calls – probably something that wouldn’t have happened in California, where everyone’s much more blasé about this sort of thing.

All I can say is, it’s been quite a week. I’m thinking it’ll be a while before everything settles down.