Yesterday was a marathon pickleball morning.
Neighbors and I met at a park to take advantage of the perfect 65-degree day, playing for almost three hours. In the pickleball world, it was a success in that only one of us fell, coming away with just a skinned elbow. Granted, later in the day getting out of a chair was a major achievement, but it was worth it.


There’s no lack of choices around here for outdoor activity. This particular park has walking trails, the courts we play on – marked for tennis and pickleball, and abuts a croquet course where people all dressed like milkmen politely move through the wickets. 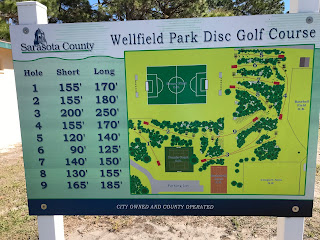 Also circling our courts is a disc golf course. I only became aware of the game a few years ago when I was hiking in some woods in our town in Massachusetts.

If you’ve never heard of it, it’s basically following a course as you do in golf except instead of toting golf clubs, you’re using Frisbees, and trying to launch them into cages. 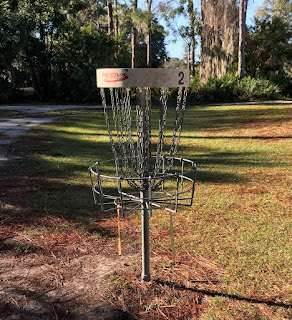 I was curious, so I did a little research. According to Wikipedia, it began in the 1900s with Saskatchewanians throwing tin lids around, finally evolving to the Canadian Open Frisbee Championships in the ‘70s.


Kind of like those common myths of Yeti, Big Foot, and even Yowie in Australia, seen simultaneously, disc golf appeared about the same time in the 1960s in Houston, Texas; Augusta, Georgia; and Santa Barbara, GA. Weirdly – to me, anyway – it’s become very big in Finland, Estonia, and Iceland.


I’m filing the idea away for when I’m too feeble to swing a golf club, although I will say I’ve never had any Frisbee-tossing skills whatsoever. And no one looked to be traveling the course in (disc) golf courts.
Posted by Marty at 6:33 AM