I opened the gym door this morning and found my group of exercise besties for our regular Friday Boomer Bootcamp, described by the YMCA as improving “gain strength, flexibility, balance, and stamina.”
All I know is that we’re constantly moving, but we get to do it to the loud beat of oldies, making it easier to ignore that gimpy hip or creaking knee.


Except they switched instructors on us. Instead of Vickie, who always keeps us stepping like backup dancers for the Four Tops, we drew a person with all the enthusiasm of a phlegmatic clerk at Walgreen’s.


Instead of warming us up with booming notes from The Temptations, we grapevined to some faint unnamable background music while our instructor, who had no apparent sense of rhythm, led us just that little bit off-beat so we struggled to mirror her movements.


Oddly, the song choices improved toward the end, although she could have used some advice on timing her musical line-up.


It was a little disconcerting to suddenly have Barry White rumbling out the intro (There's many times that we've loved. We've shared love and made love. . ) before he commenced with “Can’t Get Enough of Your Love.” Unfortunately, at this point we were standing on one leg and had to stifle any urges to move to the beat.


With “Twist and Shout” we were sitting in chairs for slowwww leg lifts, followed by Aretha Franklin’s “R.E.S.P.E.C.T.” for overhead weight raises. Anyone choosing to match movement to music would have been risking a concussion.


When I looked around the gym there was more than one sneaker tapping. I wouldn’t have been one bit surprised if at this point the whole group had launched from their chairs into a fully choreographed routine like something out of “Fame.” 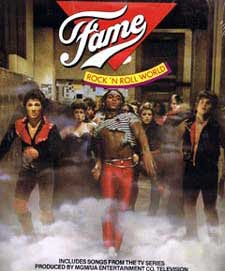 "I Can Do Anything Better Than You"
Posted by Marty at 8:58 AM