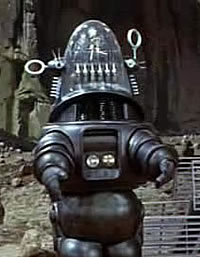 My hand mid-squeeze on an avocado, I turned at an automated sound repeating the same semi-intelligible statement, a garbled:

A manifestation of that ubiquitous Robbie the Robot from my childhood. Remember him? In those days, any time a TV show required a robot, there he was, always shaped like a metal precursor to the Michelin Man, as though that was the only model achievable.


Though even back then, his design looked capable of all kinds of whiz-bang possibilities compared to this thing that was peering at me in the produce aisle. 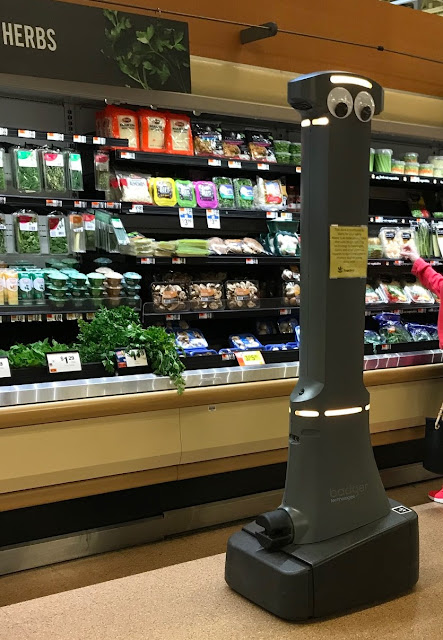 I moved from the avocadoes to the corn to the kale, while my boxy companion stayed rooted to his spot, still chirping out his warning.
Eventually, the loudspeaker system in the store announced that there was a clean-up needed in produce, and Boxy Man scooted on his way, presumably to detect the next danger for shoppers.

I continued to lettuce to mushrooms to lemons, finishing up at the nearby deli. I never did see a human with a mop appear. They might want to get Boxy Man a Boxy companion to clean up the problem, but hopefully not stereotypically a female one.
Posted by Marty at 7:06 AM