We unearthed a forgotten box of photographs the other day and I lost myself for a good hour going through them.
We have any number of albums and the pictures in them are as familiar to me by now as my right hand. In this box, though, were extras or shots that must not have made the cut to the albums.


First day of school, favorite pets, cars (do you have a picture of every car you’ve ever owned? We do.). Birthday parties with long-ago friends of my kids, holidays, vacation snaps of places I’d forgotten we went to.


It was the lake pictures that really got to me. 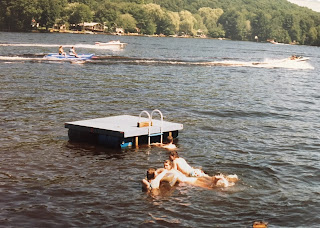 We owned a house on a lake for twenty years, buying it when our kids were the perfect ages – around 9 and 12. We afforded it by renting it out during the fall, winter and spring, and then took it over again come Memorial Day. That first summer weekend we were outside whether it was cold or hot, rainy or sunny. We braved the cold lake water as soon as we could stand it. Our friends learned over the years that an early invitation to the lake usually meant helping to drag the docks out, losing all feeling below the waist.


My kids became intrepid swimmers, and our boats evolved from a rubber raft to a rowboat to a canoe to a sailboat to kayaks to a motor boat.


Every Friday night the lake neighborhood would gather by unspoken agreement at one house or another for a potluck. Or I could be out in the backyard grilling, and Fred from next door would stroll through, flip the burgers for me and wander off. We were out of ice cream one night and our daughter slipped next door to check the freezer there.


Local dogs drifted over to spend the weekend sociably in our yard. Skilled water skiers would put on impromptu shows in front of our house. We’d explore silent coves at the other end of the lake in the morning, or take the sailboat out after a long day at work for a quiet cruise before dark.


A boat was sunk (too many people, an open bow, and a sudden wave), a tree house was built, a water balloon war was waged from one boat to another, and our daughter was married in the back yard.


Finally, though, the neighbors moved away one by one, the septic system failed, and kids grew up and headed off to begin their lives in other states. It was time.


If only it were possible to return to a past time without giving up all the wonderful things that have happened since.

Email ThisBlogThis!Share to TwitterShare to FacebookShare to Pinterest
Labels: memories