It’s been in the upper 90s for the past six or seven days and Mamie’s had it.
In spite of living encased in air conditioning, somehow she knows how hot it is out there. She’s been diving under the bed at any hint of the outdoors and yesterday morning she refused to come out for a walk. 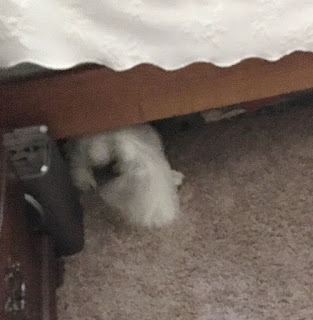 Aaand there she goes!

Before breakfast this morning I lured her out, sneaked her harness onto her, and marched her down the street. I knew we’d be away for much of the day and I didn’t want to come home to a dog spiral-eyed from cabin fever.


After doing her business, we made it about half a block until she planted all four feet and 13 pounds of her and refused to move. She’d done what she was supposed to do and decided now it was time to go home. Fortunately, I’m capable of lifting 13 pounds and that’s just what I did. I carried her another ½ block to re-boot her system and it either worked or she just resigned herself to the inevitable.


We strolled down the entry lane to our complex; it was about 80 out but the morning breeze was refreshing and the woods surrounding us looked dark and cool. We met Finnegan, a Highland terrier who must have posed a small enough threat to Mamie that she actually got within 6 inches of her while I chatted with the owner.


A bit farther and then we turned back toward home so Mamie tripled her speed. There were noises from the woods on my left – squirrels? Throwing pinecones at each other? Tree branches? The noises grew louder. I recalled neighbors’ tales of bears in the area, and yesterday’s conversation with another dog walker about sightings of unhealthy raccoons seen out in the middle of the day.


Suddenly a shirtless man in his 50s plunged out of the woods and across my path – a morning runner who nodded and continued on his way. I looked back at what appeared to be impenetrable brush and vines and wondered how much poison ivy and how many mosquito bites he was taking home. 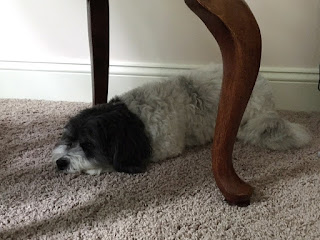 Email ThisBlogThis!Share to TwitterShare to FacebookShare to Pinterest
Labels: dog