There I was a couple of years ago, waiting for our small town’s Cultural Council meeting to get started.
It’s a pleasant committee to serve on; the sum total of our responsibility is to read applications for cultural activities, decide which would most benefit the town, and hand out money.


Last year the state divvied up the princely sum of $4,800 for us to work with, and with 23 applications, no one was awarded as much as they’d hoped for.


Still, we were able to underwrite a performance by the Youth Orchestra, a puppet show at the library, a demonstration of songbird calls, and a dance and drum show at an elementary school – just to name a few.


So anyway. Before the meeting here came one of our members with someone new to town who was joining the council . We were all introduced and then got down to business. As the evening wore on, a recollection was floating around in my head but didn’t take form until we were leaving.


The new member was an author I’d read before, Jean Stone. As a new writer, this was more exciting than having shared a conference table with Mick Jagger, or maybe Katherine Hepburn.

Well – maybe not that exciting, but here was someone with real books! Published by real publishing companies! Books people buy!

Somehow I managed not to hyperventilate, and over the next couple of years she became a friend and patient cheerleader. When she moved to Martha’s Vineyard it left a gap in our Monday fiction writer’s group, but thanks to the immediacy of electronic media we’ve stayed in touch.

Vineyard Magic,( to order ) her eighteenth book, has just been released and I bet you’ll enjoy her writing as much as I do. Give it a try.

From the best-selling author of THE SUMMER HOUSE and 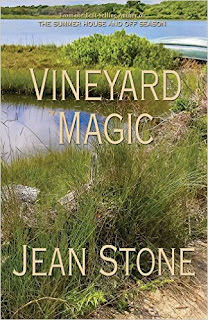 OFF-SEASON...VINEYARD MAGIC is the latest Jean Stone novel set against the intriguing backdrop of the celebrated island of Martha's Vineyard. VINEYARD MAGIC captures the predicament of the fabulously wealthy Libby and Walter who have now lost it all: the co-op, the trust fund, the house in Belize, and maybe even their island retreat where Libby has gone into seclusion. Enter Libby’s air-kissing, society friends who go to the Vineyard to offer best girlfriend support.


JEAN STONE has been applauded by Publishers Weekly for her "...graceful prose, vivid imagery, and compassionately drawn characters" and by best-selling author Sue Margolis as "...a masterful storyteller."
Posted by Marty at 11:19 AM