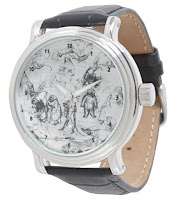 So last night we were watching a cop show we’d found through our Amazon Prime account (Bosch, based on the Michael Connolly series. How could you not like a series where the main character is named after a bizarre 15th century artist?).

A young officer was killed in what ostensibly was a convenience store robbery. The perp yanked the thin gold chain from the officer’s neck and the watch from his arm. Now we knew that was because the officer had been working under cover, the watch held the bugging device, and the cop had been discovered to be a snitch. But it set me to thinking.

Was it plausible writing in this day and age for a thief to consider a watch worth stealing or was this an anachronistic idea? Granted, it looked pretty expensive – covered with knobs and outer rings and clunky enough to look worthy of deep-sea diving – but do people still wear watches? As someone old enough to be in the watch-wearing demographic, I wasn’t sure.

I thought I had read recently that standard wrist watches had become passé since anyone under 50 now has a smart phone permanently imbedded in his palm. And then we have that whole FitBit phenomenon -  and with the Apple watch coming up in the ranks, a trend-setter’s wrist could get pretty crowded.

At my age, I can happily hand off those old worries about what’s in style and what isn’t to someone who cares.


And as a member of the blissfully retired, I’d need to find my watch first before I could decide if it would brand me as sadly out of date.
Posted by Marty at 8:33 AM