Today we’re off to a wedding, an event that has caused me to stop and think.
No, not a reflection on how amazing it is that my husband and I are still married after all these years, or perhaps a realization of the serendipity that brought a guy from Massachusetts and a girl from Virginia together in the first place. I also haven’t been meditating much on the soon-to-be newlyweds. I don’t know today’s young couple; the bride is the daughter of a friend.

So while I wish them many, many years of happiness, my thoughts are on weightier matters.

I'm of a generation that remembers garter belts – before they figured only in male fantasies. Back when they were limp white flappy objects culminating in those clasps that would dig painfully into your thighs when you sat down. I remember the arrival of the miracle of pantyhose.  Girdles had disappeared by then and while no one missed their passing, the powers that pantyhose had to rein everything in again was welcomed.

We wore stockings to high school with our stitched-down pleated skirts, then later with our trendy A-line skirts. I even wore them in college the first year when we weren’t allowed to wear pants on campus - until schizophrenically everything changed the next fall and we were all lounging around in embroidered bell-bottoms. Liberation had arrived.

Now it seems fashion demands that we go bare-legged with our nice dresses and our heels. I can’t even use the weather as an excuse to cover my legs since the high today is supposed to be in the low 80s.

And yet, be honest folks. Does the world really want to see the bare legs of a woman old enough to remember hula hoops and skate keys? Yes, we all run around in shorts and sandals, but it’s harder to carry off those pale, age-spotted legs with heels. 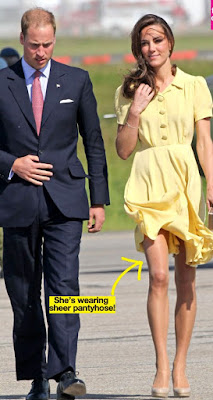 Plus, some people seem to be single-handedly bringing new life to the pantyhose industry.


Regardless of my final decision, I can at least depend on the invisibility that comes with being an older woman.
Posted by Marty at 6:52 AM

Email ThisBlogThis!Share to TwitterShare to FacebookShare to Pinterest
Labels: fashion