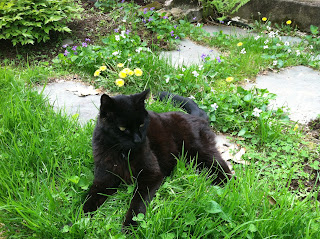 Last fall we said a final goodbye to Satchel, our eighteen-year-old black cat. He was arguably one of our favorite pets, more of a dog in a cat suit than anything else. He was certainly the only cat we’d ever had who would play fetch.

We are now in unfamiliar territory – the land of the petless. Since my husband tends to stay rooted in his recliner, there is now no one to run to the door when I return home. My clothes are strangely fur-free, and the twin odors of cat litter and Friskies tuna no longer waft through the house. When I hear an odd noise I actually have to pay attention instead of dismissing it as my sixteen-pound cat thumping around upstairs.

Now when I visit friends with pets, they probably wonder why they’ve bothered to invite me at all since their animals get more attention than they do. Molly, the giant Newfoundland; Shultzie, the miniature dachsound; Blue, my son’s skittish cat – whoever they are – big or small – as long there’s fur, when I leave they’re a bit worse for the wear. Most rewarding of all are my daughter’s cats, Marvin and Dusty, who bear a strong resemblance to the cat in the Peanuts cartoon. They drape themselves over you like so much Spanish moss.

We had planned to swoop into the local animal shelter this spring and bring two more cats home to what is unquestionably Cat Heaven. However, we will likely be away for some of next year, beginning with a two to three-day road trip.
I do recall seeing other cars with a cat stretched below the back 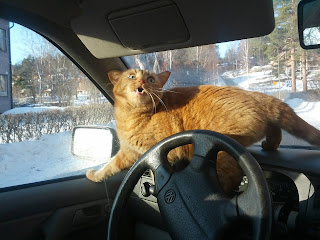 window dozing blissfully, but the more likely scenarios for us are an animal ricocheting around the vehicle like a furry icon in a video game and/or two people with clenched jaws, whose faces match their gray hair, the result of being trapped in a car with the unending complaints – and emissions – of an unhappy pet in a carrier.

So now I’m spending way too much time watching cat videos, I wait anxiously for news about Albert at Going Gently http://disasterfilm.blogspot.com/ (don't even get me started on Winnie), I melt at pictures of Eli at Henny Penny Lane http://hennypennylane.blogspot.com/, I look forward to what Chance is up to at Far Side of Fifty http://farsideoffifty.blogspot.com/ , and of course I've hit the motherload at Knatolee's World http://knatolee.blogspot.com/ , where she's apparently preparing to build an ark.
Meanwhile, the moles have turned the front lawn into their own personal Disneyworld, and the chipmunks in the yard are closing in, now that my mighty hunters are gone.