Easy to Start - Harder to Stop

On Saturday we saddled up Old Paint, (otherwise known as Lily, our 18-year-old SUV) with the bikes and took off for the town of Chicopee.
We planned to try out a new path that had been constructed along the river. We were a little hazy on where the path began and ended, but the forecasted rain was holding off and we were up for an adventure.

On the way over, the brake warning light was flashing, but we checked to make sure the parking brake wasn’t engaged and dismissed it as just another weirdness of our old vehicle

We first parked in back of the town’s new Senior Center, which had cleverly been grafted onto a reclaimed building. We walked our bikes up to the path and enjoyed the contrast of the pristine river on one side and the huge abandoned manufacturing facility
for Fisk Tires that closed in the 1950s on the other. 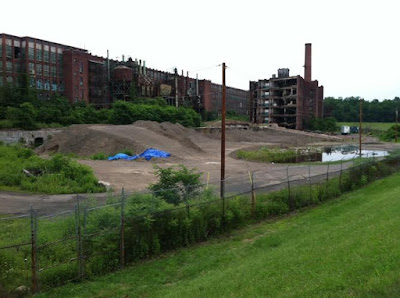 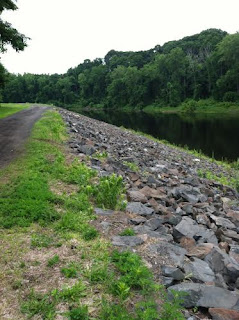 One thing I didn’t enjoy were the scenarios playing across my mind of one of us plunging to our death over the trap rock shoring up the river bank should our bikes teeter to the right.

I’m still a cautious biker, having only learned how at age 30.

It was a short ride, though, the town not yet having connected the stretch we were on with another portion of trail farther down. So we loaded up the bikes and tootled a bit farther into town.

The brake light was still on, so in a moment of inspiration I actually dug out the owner’s manual in its nest of Dunkin Doughnuts napkins in the glove compartment. Aha. Brake fluid, perhaps.
We opened the hood and found the container. Yep, low. But still with fluid just at the minimum line. Something to deal with when we got home.

Now we were at the library, but after circling the area with our bikes, we couldn’t find an access point for the trail.

Back to the car. Now the brakes were getting a bit squishy.

Fortunately, my husband’s sister and her husband live in Chicopee and were actually home when we called to say we were heading their way. Our brother-in-law is an engineer whose idea of a fun afternoon is disassembling an entire motor. 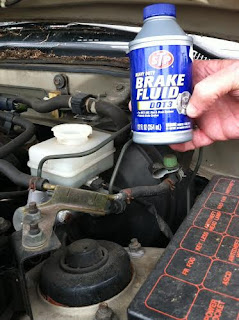 Twenty yards told us we need brake fluid NOW. We coasted into a service center, bought some, and filled ‘er up.
I pumped the brakes as instructed and we were rewarded by a festive fountain of fluid spraying onto the asphalt. No way were we going to make it to the in-laws.

Fortunately, we spotted a repair shop another 40 yards away and made it there with emergency lights blinking and much honking in back of us. It’s still a mystery to me why the other drivers were unable to connect the flashing lights with our slow speed.

Our sainted brother-in-law arrived with his pick-up, transferred our hitch to his vehicle, and loaded the bikes. I squished myself in the jumpseat in back (very impressed with my own agility, I must say) and home we went, having had plenty of adventure for one day.