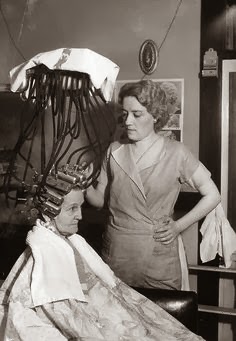 My unease with hairdressers is deep-seated.
It’s founded on a combination of some really bad haircuts as a child and my innate need for control. In the early years of our marriage my husband cut my hair. We would stand in the bathroom, and he would cut a straight line across my back, just above my bra.  Not only did this save money, but it satisfied both our needs: he never wanted me to cut my hair in the first place, and I knew he would never chop off too much.
Yesterday I finally went to the salon for a trim. The last time I had been there was in October, four months ago. My hair had just begun to graze the bottom of my ears, which gives you an indication of how much I lost on the last visit.
But I like my hairdresser; I’ve been going to Albert for years and that’s what did me in. He didn’t have another customer waiting, so we talked and he trimmed and we talked some more and he trimmed some more. I’m pretty sure he cut my hair twice. There’s also the problem that each time he has increasingly been giving me the acme-all-purpose-grandmother-gym-teacher cut. I’m done with hair long enough for a pony tail (with naturally curly hair I just don’t have the patience anymore), but I’d rather tell people I’m a grandmother before my hair does.
When I arrived yesterday, Albert was with another client, so after greeting his wife behind the desk I settled down with a magazine. I had found a riveting story profiling the wardrobe people for famous TV shows so I was happy to wait, but my reading was interrupted by a 50-ish woman sitting next to me. She was one of those women who always make me feel unkempt: shiny patent leather flats with gleaming gold buckles, slim black slacks, trendy jacket. Very upscale and together. I was there in corduroy jeans and a turtle neck.
Her superior aura, though, was shattered when her phone rang. The ring tone was the Gangnam Style song, full-volume. She answered it and launched into a detailed description of her current dental issues: implants, cost, and pain. By now I was drawn into the drama of it all – she had already spent $10,000  - but Albert was ready for me.
I took off my earrings, got shampooed, and then he led me to his chair for my trim. I showed him the pictures I had brought, thinking this might stave off his urge to chop and we talked – as we always do – about what my hair does in the winter versus the summer. (My winter hair is submissive and mine to command. My summer hair is sadistic and unpredictable.)
Happily, he reined in his scissors this time so I won’t have to wait another four months for my next visit. However, I didn’t leave his chair completely unscathed.
After several years with his styling chair in a kinder, darker corner of the shop, he has now moved it to one right in the front window. As I sat there with the afternoon sun bouncing off of my age spots and underscoring my wrinkles, I realized that a bad haircut is the least of my worries.
Posted by Marty at 8:07 AM