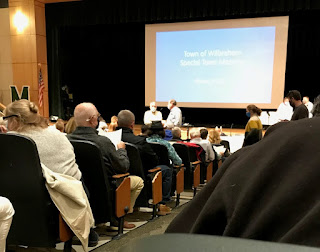 Last night we sat in our town’s high school auditorium as the sausage was made. The ingredients were facts, opinions, boredom, and annoyance. Like sausage making, not always pretty, but the end product was worth it.

Since the purpose of last night’s town meeting was to get a particular issue on the town ballot for next Saturday, the campaign to draw a quorum was relentless, with handouts, flyers in the mail, ads in our small-town paper, and robocalls. It worked. My Guy and I left the house half an hour early and arrived to find the school parking lot almost filled. 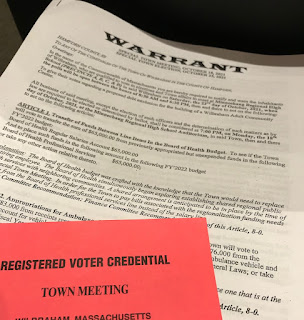 We registered, were issued our red cards for voting, and found our seats. The first few items on the warrant were for a transfer of funds, appropriations for a new ambulance, a rezoning of a building from commercial back to residential, and the acceptance of a donation of land to the town. These votes were simple majorities, so we held our red cards up to vote yea or nay, and things zipped along in a timely manner.

Then it was time for the issue of building a new senior center, and after a professional presentation by the chair of the committee and the architect, it was time for questions and comments. The cranks and kooks rustled in their chairs, eager to have their moment at the microphone.

There were a few legitimate concerns: a generator wasn’t included in the plans- what would happen with the elevator in the event of a power outage. But then we were subjected to a diatribe by someone who’s been beating the dead horse of using a defunct school instead of funding a new build. He was finally asked to finish, and next up was a woman worried that all the chairs would have arms, pointing out that she was too fat to sit in them. After she was reassured that yes, there would be armless chairs, a young man next took the mic. It didn’t take long to realize that he was challenged in some way as he rambled from taxes to the town golf course to building on swamp land to arcane real estate laws.

At long last, it was time to vote. This time each vote had to be individually counted and we dutifully held up our cards as the people came down the aisle, once, and then again for good measure. Final vote – 400+ for, 49 against.

Opinions were voiced (nutty or not), and each citizen in attendance exercised his stake in our town, the same scene that's been enacted for the past 50, 75, or 100 years.