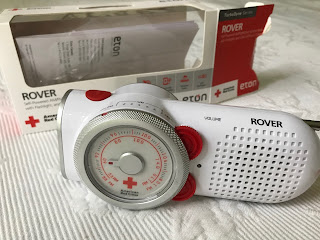 This afternoon I ducked into a convenience store in town to replace the half gallon of milk I’d poured down the drain.
It was $2.99, I handed the guy $3.00 and never saw my penny, which he dropped right back into the register. That’s one way to slowly add to the coffers, but I didn’t say anything. He didn’t know, but I taught his son in high school in the International Baccalaureate program – very rigorous. I was very fond of the son, who was made to work in the store from 5:30 am till he left for school and was rarely given time to do homework. Fortunately, son got away, worked his way through college and is fine now if Facebook is any indication. Still, if the father feels he needs his penny more than me, fine.


I dumped a jug of milk down the drain thanks to Isaias, who came roaring up the East coast from the tropics this week. We were lucky compared to many around us. We only lost power for 24 hours, coming back on line Wednesday afternoon. Some areas around us, though, are still in the dark. We kept busy listening to my very cool wind-up emergency radio I’d bought on a whim years ago and doing a crossword puzzle by lantern light. The next day we spent the morning buying ice and taking periodic drives to charge the phones.  All I lost was ice cream, said milk, some cottage cheese, mayonnaise, and a pound of hamburger I’d had thawing. I drove it to a public trashcan on one of my trips; I couldn’t imagine how nasty it would have made the garbage can in 85+ degree weather. It’s surprising how difficult it can be to find a public trashcan when you need one.


Our fire alarms are hard wired, with battery backup, and the battery (with a 4- year life span) had last been changed in 2016. Wednesday morning the control panel began chirping. Wonderful. Never mind house flies – Mamie is so terrified of smoke alarms that the last time one went off, she was still shaking the next day. Really. Every time I took her outside Wednesday, I had to physically carry her back into the house since she refused to come.


The good news is that the nice alarm man came and dropped off a new battery that day. Also, nothing fell on the house, it was summer so we weren’t cold, and all the food in the freezer was saved.


And Mamie finally relaxed enough to lounge outside in the debris. 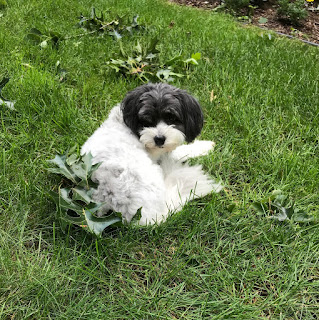