Thank you, pandemic, for at least bringing us Zoom. Our four-way visit was a roaring success, but the whole time I kept thinking how different we are from each other. 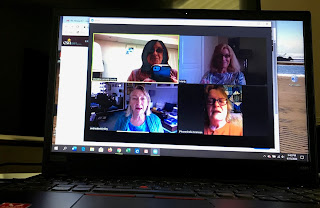 Chris is a full professor with tenure at a small college and lives in Maryland. Her face is seen on any street in Ireland, and she has the dark hair and eyes of her black Irish forbears, thought to be offshoots of long-ago raids by the Spanish Armada. Her doctorate is a long way from her father’s career at the Post Office, and her embrace of the Jewish faith upon her marriage is even farther from her strict Catholic upbringing. Even in high school Chris pursued knowledge with the hunger of a junkie.


Andrea finished up the farthest away, in Maui, where she lives on a compound with her sister, husband, and other family members. Her career had been in television, in the middle of the country. We were dumbfounded when she married a man twenty-six years her senior, but happily, he’s still going strong at 96. Her father worked for the State Department, and her mother was perpetually involved in one worthwhile cause after another. Andrea is our flower child, but with a knack for the practical, and she exuded a Mother Earth kind of warmth even in high school.


Sheila is a glass artist in West Virginia. A stained-glass wall of her making graces the Rockport Public Library in Massachusetts, and years ago one of her ornaments helped to decorate the White House Christmas tree. I lived with her family for a half of my junior year to simplify college applications while my parents were in London. Her father was retired military, with a perpetual twinkle in his blue Irish eye. Sheila married twice, but now lives alone with her small dog and occasional cats in her little house cluttered with art. She, like her two sisters, had been an artist as long as I’ve known her.


It fascinates me how we all began in the same high school, zipping around Arlington, Virginia in Sheila’s old orange Renault, sharing the same hopes and angst, with no idea of what life would bring us.
Posted by Marty at 12:12 PM