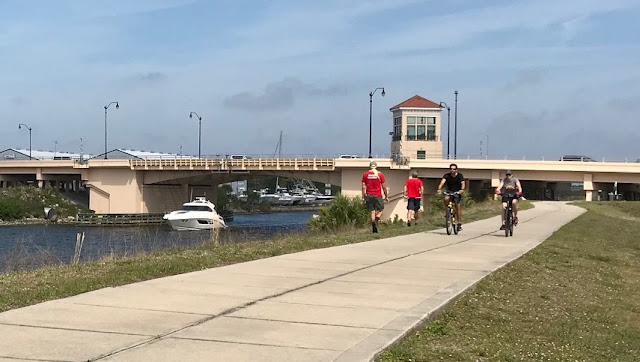 We’d decided to spend the morning on the bike trail, so since I acquired a dermatologist the same time we acquired a life in Florida, I slathered on the sunscreen.
With a DNA assessment of British Isles and nothing but British Isles, and the pale skin and freckles that goes with it, I have to be careful. A pre-sunscreen childhood of Noxema nights and days of peeling long flakes of skin off of my sunburned body means now in my later years the chickens are coming home to roost.


The next decision was bike helmet vs baseball cap. Which was the greater danger – concussion or cancer? (On today’s ride I spotted the answer: a doughnut of a straw hat that fits over the outside of the bike helmet.) I went with the cap because it seemed unlikely I'd keel over on the trail and the cap would cover more of my face.


The portion of the bike trail we chose runs along the Intracoastal – a body of water I knew nothing about till we came down here. It’s a 3,000 mile inland waterway that runs from Boston, around the tip of Florida, and on to Brownsville, Texas.


The idea of a route that would be safer from storms and enemies began as far back as colonial times and became more of a reality in the early 1800s, growing through that century and into the next as events like WWI showed the need for secure bulk transportation. 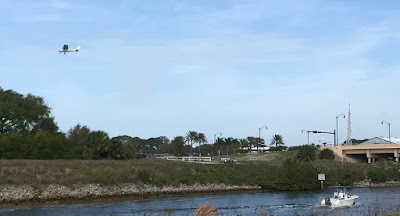 For me, it’s simply a good place to find a bench and watch planes come in to Venice’s small airport, along with boats and bikers.

We were also on hand to see two of Venice’s three bridges open for Sunday travelers. There's a job for another lifetime: manning (personing?) the bridge tower, where you could watch the boats go by and every now and then raise the drawbridge. 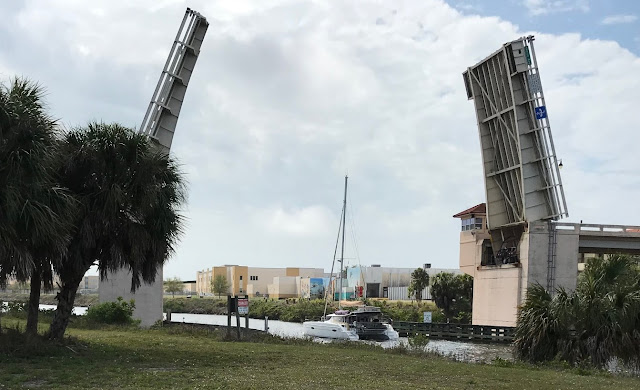