I can still remember the orange corduroy jumper I made for my daughter’s first day of school.
It had orange buttons shaped like tiny pumpkins and the lining was an orange flowered print. Standing there by the stairs, with her lunch box and curly blond hair, she was adorable.


I also remember delivering her to Northeastern University in Boston and worrying every single day of her first week there. I finally realized it would be a long four years – or in her case, five, with the alternating semesters of subject-specific work/study – if I were to continue worrying.


Now, apparently there’s one more item to add to the pre-college shopping list of sheets, bathroom caddy, and dorm fridge.


You could say they’re kind of the defensive version of those offensive brass knuckles. If trouble comes your way, you give them a squeeze and out pop three Wolverine-like plastic claws right between your fingers. And not only can they leave a mean stripe, they collect DNA. 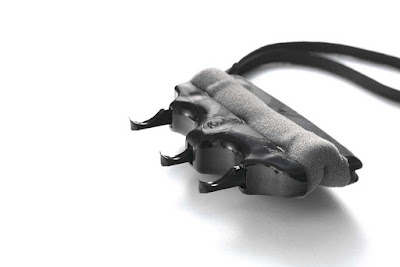 While this sounds like X-Men wanna-be material, these really exist, are made in the USA by veterans, and the producers say they send a portion of the profits to a non-profit working to put an end to violence against women.


Had my daughter had these back then, I wonder if I would have logged more sleep her first week at college, or would these have made my worries about the city dangers lurking outside her dorm that much more real.
Posted by Marty at 1:35 PM