Laura Ingalls Wilder has nothing on us 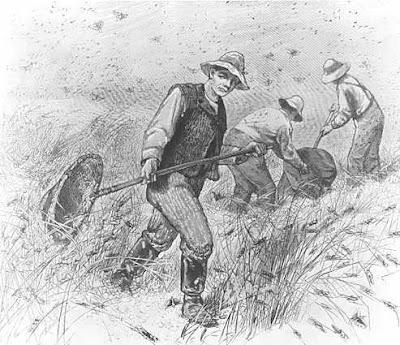 Remember that chapter in On The Banks of Plum Creek?
"A cloud was over the sun. It was not like any cloud they had ever seen before. It was a cloud of something like snowflakes, but they were larger than snowflakes, and thin and glittering. Light shone through each flickering particle."

As I may have mentioned, we’re downsizing, and downsizing with a purpose other than obeying Thoreau’s recommendation to “simplify, simplify.”
We’re off to a condo – we hope. We’re currently twirling in the limbo that exists between acceptance of the offer and actually plunking down our money and grabbing the keys. Inspectors, underwriters, lawyers and everyone else who controls our fate are beavering away doing whatever it is they do while I sit here trying to remember if the new linen closet will hold more than 4 towels and one set of sheets.
All I can say is, this had better happen because the universe has been telling us in no uncertain terms that it’s time to drop any sentimentality about our house and move.
Yes, three days after returning here from Florida I found myself in Urgent Care with a tick bite from cleaning up the yard, followed by poison ivy up my arm a week later.  But that can happen to anyone.
And when the entire frigid, rainy month of May was followed by 4 days of searing heat it did serve to remind me why I’ve always wished we had the type of heating system that could accommodate central air.
And sure, when the town promised to patch our road but then doled out the asphalt in one tablespoon increments, leaving our (admittedly, private) road no better than before, the concept of living on a recognized  and frost heave-free street was even more appealing.
Then Mamie became unenthusiastic about going on the grass, and if we sat outside we’d be picking the occasional caterpillar off of us.
It wasn’t Plum Creek, and I wasn’t dealing with grasshoppers, but it's still pretty shudder-inducing. 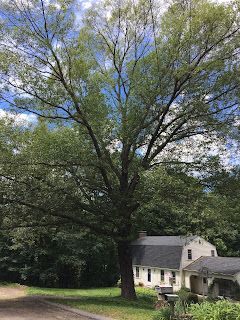 I should have recognized what was going on when I stepped out in the driveway and heard the faint sound of rain. Except it wasn’t raining – unless you counted the partial leaves that were drifting down from our massive and really beautiful oak tree in front of the house.
When we had three days of steady rain, I realized that what I had heard was not the leaves drifting down. It was poop. Caterpillar poop. And the rain had turned it into sludge – on the driveway, the sidewalk, the grass. No matter where we walked, we acquired a thick coating of poop and shredded leaves on the soles of our shoes, which we had to leave on the porch.
Since our garage was full of crap items to be donated or thrown away, I couldn’t put my car away, so it sat under the oak tree and took on a coating of indelible polka dots of poop. When the rain finally blew away, I headed off to the car wash. Nine dollars later, it looked exactly the same. Two hours out in the street with a boatload of baking soda and a scrub brush and I finally got it clean.
Now if we can just get the pencil pushers to hurry up so we find a buyer before the gypsy moths kill the oak tree and it keels over onto the house.
Posted by Marty at 10:39 AM