So, yes, you can fit seven people into a two-bedroom condo.

My daughter and FSL (favorite son-in-law – even if I do only have one) and three grandboys E. G. and G. arrived and we began a three day whirlwind of Florida entertainment before they moved on to the Magic Kingdom.


Maybe the fact that we were rarely home made it all so do-able. The first day we whisked them off to lunch at a restaurant brilliantly located on the beach. Weary parents operating on 2 hours of sleep after an early plane ride could sit in the shade with a beer while the kids galloped around in the water and ran back and forth with shells for us to admire. 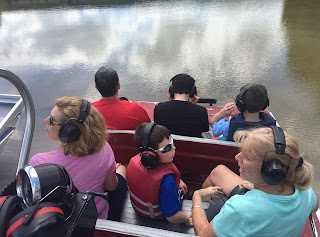 The next day began with an airboat ride down the shallow Peace River.
Every little boy’s (to include My Guy and FSL) heart swelled with excitement as the motor roared at our back and we were slingshotted forward.
Add all the gators that squinted malevolently at us from the shallows and they were in heaven. The guide knew his audience, providing information about the flora and fauna for the adults and spinning a few doughnuts in the water for the kids.


That evening we celebrated the sunset with a drum ceremony at Nokomis Beach. Some celebrants come in belly-dancer spangles, or bring glowing hula hoops, grandmothers dance and channel their hippie days, and in a few sections “herbal” scents rise to the sky. Most importantly, it was another outlet for three boys to run around and yell.


The third day was slower moving but just as successful. We shuffled around here in the morning with breakfast, a continuance of the chess game the seven year old is now hooked on, and on-line time for the older two. After a stroll through the shops in Venice and pizza, and a desperate but successful hunt for a parking place (this was a weekend at the peak of the season) at Casperson Beach, we settled into our sand chairs and stayed there for the rest of the day. Again, another opportunity for the guys to gallop around and splash through the waves. 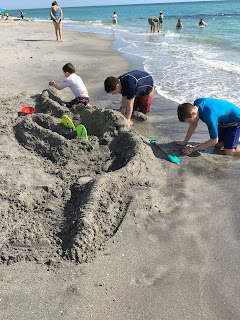 We now have a lifetime supply of shells, a sandy backseat, and a strangely quiet condo.